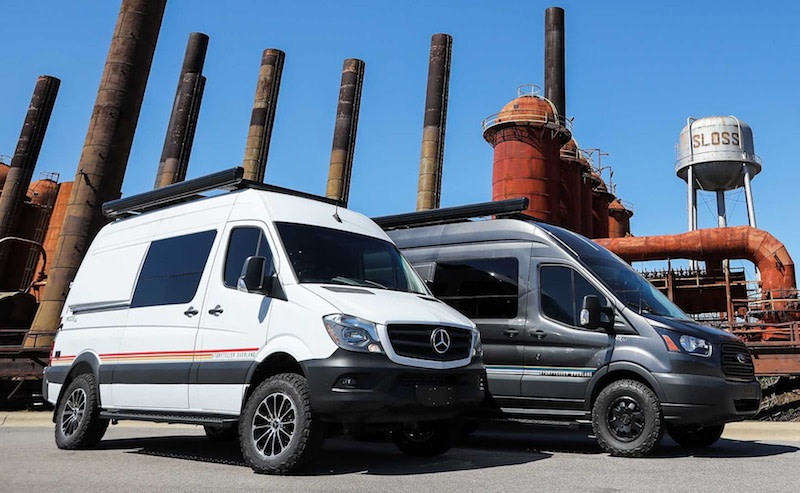 During our search for the perfect camper van, we learned that each van chassis has its pros and cons. No one platform is perfect. Whether you’re looking to build out your own camper van or buy a used or new camper van, it’s important to consider the van chassis used for the camper van conversion. Roof height, bed layout, off-road capability and fuel type are just some of the things to consider when looking for a van to suit your way of camping.

While this is not an exhaustive list, this post will cover the most widely used van chassis for camper van conversion and I will share my opinions. I’ve provided, what I feel are relevant specs to give you a good comparison between van chassis makes. Specs like GVWR, carrying capacity and towing capacity are not included because it can vary widely depending on the trim level, engine choice, duty rating and other variables.

*Note: 2020 model year will include all-wheel-drive as an option from the factory for vans with the gas engine.

With the combination of the highest roof, the Eco-Boost gas engine and ability to either convert to 4×4 or get AWD as an option, the Transit would be my top pick for a van build.

This is a fully converted van on the Ford Transit 148″ wheelbase long, high roof that has been converted to 4×4.

We put around 33k miles on our ProMaster and really liked it. The extra width of the ProMaster really makes a difference inside and can provide more options for bed layouts. If 4×4 isn’t a requirement and you’re not planning on towing anything, the ProMaster is a great platform for a van build.

This is a fully converted van on the Ram Promaster 159″ wheelbase extended, high roof.

While we really like the amount of cargo space in the standard 170, the sticker price, maintenance costs and diesel fuel limitations would deter us from purchasing one. That said, with the gas engine as a future option, that opinion may change. Despite the extra cost, the Mercedes badge carries a certain cache and the Sprinter has been a proven platform in the van world.

This is a fully converted van on the Mercedes Sprinter 4×4 170” wheelbase extended, high roof.

Due to the lack of cargo size compared to the it’s length, we would only consider the NV if we were looking to build an overland vehicle where 4×4 and larger tires were a requirement. The truck platform of the NV lends itself well to this task.

I’m mixing the pros and cons because the Express is a special case.

If we were looking for a budget van build, a used Chevy Express / GMC Savana would be the van we use. That is unless we got a Ford Econoline.

The Econoline was put into limited production when the Transit was introduced. Since 2017, only the cut-away version of the E-Series van is available. The specs for the E-Series van are very similar to the Chevy/GMC van. These things have been around since the 1961 model year and they’ve held a strong grasp of the full-size van market ever since making them even more plentiful than the Chevy. With a strong after market, parts availability and ability to convert to 4×4, the Econoline is another good choice for those looking for a solid van on a budget.

This is a fully converted van on the Ford Econoline 350 cutaway that has been converted to 4×4.

NOTE: The specs were compiled from various sources and may not match the current model year or the specs may have changed since publication. A good resource is Sportmobile’s website where they list the various vans and specs. In some cases, I was unable to find certain dimensions on the manufacturer’s website and sourced them elsewhere so assume all dimensions are approximate. Refer to the manufacturer’s website for the most current specs.

Mercedes only has 12% of the number of dealers in the U.S that Ford does. Consider the cost of maintenance and maintenance intervals when choosing a van chassis for your camper van conversion.

Modern diesel engines in the U.S. and most first world countries require ultra low sulfur diesel. If your adventures take you to Mexico, for example, you may have a hard time finding the right diesel and adding the higher sulfur variants will cause damage that voids your warranty.

Test drive before you buy.

Before you decided to buy a used or new van chassis for your camper van conversion, consider renting a camper van or two to see which van chassis is the right fit for you. You can find campers for rent build on most of the van chassis mentioned in this post.

Which van chassis would you choose for your camper van conversion?

Check out our List of Camper Van Conversion Companies


We’re Joe and Kait Russo. In 2015 we transitioned to a nomadic lifestyle and this is where we share our experiences.
Learn more about our story.