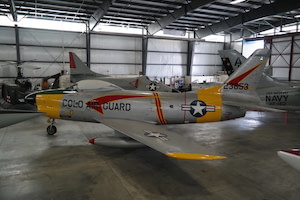 Pueblo Weisbrod Aircraft Museum is a warbird museum about 50 miles outside of Colorado Springs, Colorado.

Roasted Pueblo peppers lead us to the city, the air museum kept us there. Our original plan was to spend the night in our RV, load up on peppers and head to our next travel destination. A quick search of Harvest Hosts in the area lead us to the Pueblo Weisbroad Aircraft Museum.

This museum houses over 100 years of aviation history with military aircraft, equipment and vehicles on display from WWI through Vietnam. Located at the Pueblo airport, the museum is part of a base constructed in a record 90 days shortly after the bombing of Pearl Harbor.

We took a fully guided tour with Mac, one of the volunteer docents. The cost was $9/adult and is worth every cent. The tour lasted about two hours and went through every plane and display on site. Mac was a wealth of knowledge and had a great sense of humor.

Two of the many cool aviation facts learned on the tour

The museum has two hangers with a large number of items on display.

Inside the first hanger was a B-29 and smaller planes including the C-47, which looks small parked next to the B-29.

In addition to the aircraft, there are displays of weapons, uniforms, patches, etc…all donated to the museum.

In the second hanger, there were displays of the U.S. space program and a tire from one of the space shuttles. A STEM learning lab for children was setup between the space displays and modern day aircraft, with interactive experiments. Even as adults, we found the experiments fun and educational

There is a wide variety of jets and helicopters used during the Korean and Vietnam wars and beyond. Most of the aircraft on display were used and are on loan from the government. We heard some stories about those specific aircraft and the people who flew them.

There are more aircraft and vehicles on display outdoors. Some are complete while others, like the two Migs, were in pieces waiting to be restored. There were also several engines that were pulled from the aircraft which I enjoyed looking through and being able to see the inner workings of the actual jet engines.

After the tour, we went off on our own to explore everything in the museum and spent another hour examining the aircraft up close, connecting with the history of each one.

This has been one of the best museum experiences. Unlike larger museums, the displays are out in the open for patrons to touch and see up close. We had the opportunity to walk up to almost every aircraft/vehicle, touch it, look inside and really get a sense of the machine.

During our tour with Mac, he showed us how thin the skin is on many of the planes by having us knock on them. He also showed us the contrast of planes made by Grumman which were built with a much thicker skin than others. Being able to go inside a few of the larger aircraft and get a sense of what it was like to fly in one made the tour extra special.

As you can tell from this post, we really enjoyed our experience. We highly recommend the Pueblo Weisbrod Aircraft Museum. It’s a great stop on your way to Colorado Springs.

RV Parking at the Museum

We were able to park overnight at the museum with our Harvest Hosts Membership.

The museum has a good sized gravel lot. We were able to park our 29′ motorhome next to the edge of the lot. This allowed us to put our slides out and offer a pretty cool view of larger aircraft and trucks.

The museum doesn’t have any facilities for RVers, but they told us we were more than welcome to use the restrooms during operating hours. Once the museum was closed, we had the lot to ourselves and ran the generator when we needed.

The area is quite noisy with what appears to be a machine shop across the street and a 24/7 airport. The noise didn’t bother us the two nights we spent at the museum. Tip: call the museum before arrival to confirm RV parking as rules do change.

Note: dogs are not allowed in the museum. We were able to walk Leo in the parking lot and around the industrial area with had plenty of grass.

What cool museums would you recommend that we check out on our journey around the United States?


We’re Joe and Kait Russo. In 2015 we transitioned to a nomadic lifestyle and this is where we share our experiences.
Learn more about our story.