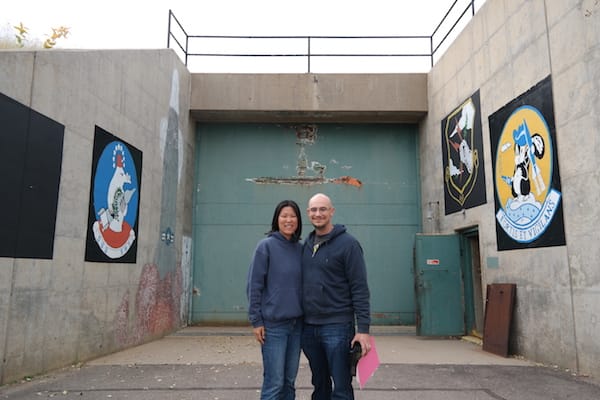 Below is a recap of our previous two visits to Missile Site Park, a time when the campground was still open and tours of the silo were still being offered.

We discovered the Missile Site Park back in 2015 when we were traveling the United States in a small Class A RV towing a Jeep Wrangler Unlimited. At the time, we were visiting friends in Fort Collins, Colorado and needed a RV camping spot for a few nights.

In 2020, we returned to Missile Site Park while exploring Colorado, we decided to camp overnight at Missile Site Park in our truck camper. It brought back some found memories of our first time here and everything was exactly as we remembered five years ago.

During both visits, the campground has 12 sites and the cost was $20/night with no hookups. Each site included a covered picnic table, BBQ grill and garbage can. There was also a bathroom with flushing toilets.

No reservations were accepted and there was a five night maximum. The pay station was at the entrance to the campground which accepted cash or check made out to Weld County.

Some sites had trees that provide a little bit of shade while the rest of the grounds were covered in dry grass and weeds.

While we were camped at Missile Site Park, we saw rabbits, gophers and some very beautiful birds.

Verizon LTE coverage was very good. The data speed did slow down during the day, but still good enough for us to work from the road.

For the most part, we felt safe camping at Missile Site Park (read RV Safety). During our last visit, there was a constant flow of vehicles driving to the park throughout the day and night. Many of them appeared to be locals visiting for the day or to watch the sunset. Most of them were not staying at the campground.

During our first visit to Missile Site Park, we scheduled a tour of the decommissioned missile silo. The tour was given by the groundskeeper, Ruben, who is retired from the Air Force. He was a wealth of knowledge when it came to the missile site.

Although the site was decommissioned in 1965, it has been well preserved and represents an interesting and very scary time in our history. The site is still used today by the county to store records.

During the tour we got to visit the “tomb” where the missile was housed. It includes a simple mock up of the Atlas along with the original cradle and lifting apparatus for the missile. Unlike the missiles housed in silos, the Atlas was laid down. It took 12 to 15 minutes to stand it up. There was no structure to the missile so it would collapse unless it was pressurized.

Throughout the tour, there are photos depicting what the active site looked like including the crew that worked there.

Here are a two interesting facts we learned on the tour:

We were really glad to have discovered Missile Site Park in Greeley Colorado and hope Weld County will bring back overnight camping at this facility.

For the most recently information about Missile Site Park campground, visit the Weld County website.


Hey! We’re Joe and Kait Russo of We're the Russos. Since 2015, we have been traveling in various adventure based campers together and this is where we share our experiences, travel guides, essential gear and tips from the road.
Learn more about our story.